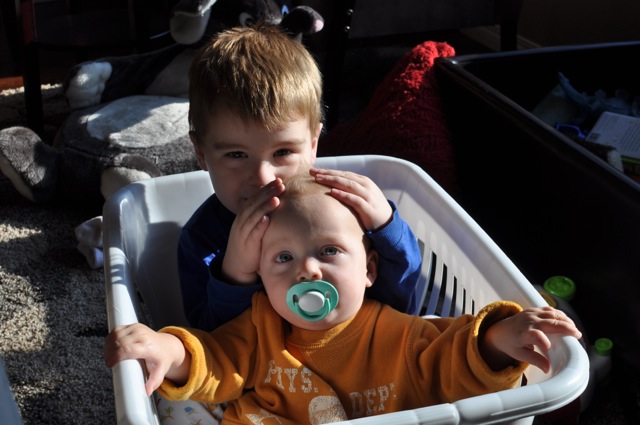 We’ve got two kids and they’re both pretty ridiculous. Cameron is 3 – and will be 4 in June. Graham is 1 and will be 2 in August. I put them to bed about half an hour ago and Graham is still chatting away from his crib, interrupted every few minutes by his big brother across the room yelling in frustration, “Go to sleep!!!” (being a big brother that big brothers are), only to have Graham burst out giggling – because that was the response he had been looking for. And then the game starts again. I’m pretty sure Cam is enjoying it as much as Graham, but he doesn’t let on. Graham is definitely the precocious one, there’s no question. And Cam, well…. he’s me. And it worries me a bit, if I’m honest.

Cam’s got my stunning good looks and my contemplative tendencies, yes, but he’s also got some of the stuff I’m not so proud of. Stuff that I saw my parents struggle with for most of my own upbringing and if I’m honest, there were never really any satisfying answers or parental practices for dealing with it. At least nothing that brought peace and reconciliation on both sides. Stuff like stubbornness and pride – and I’m not talking your typical stubborn child syndrome. I’m talking about a kind of stubbornness that set the tone for my entire character. Everything else about me, it seemed – particularly through the tumultuous teen years – could be defined in light of my stubbornness. And this gave birth to pride (or the other way around maybe). I always had to have the last word, argued, lacked grace, and would be adamant about getting things my way. It was, like I say, ugly. I’d like to think (I hope) that through my parent’s influence, my wife, my own kids, and an ongoing transformative work through Jesus over the last few years I may be on my way to overcoming this, but there are moments – and you can ask any of these influences, including Jesus – where the streak persists.

I don’t blame my parents for this. I was the 4th of 4 and had set the sails in a totally different course with their child rearing. I presented an unexpected challenge that they did the best they could do with the tools they had available. And I shouldn’t say their parenting didn’t work – look at me! (Look at me!) Surely they did something right, right? But curbing the streak of stubbornness in me is something even they couldn’t conquer. There’s a lot that could be said of this, but suffice to say I don’t blame my parents for who I am.

Having said this, though, I am aware that I need a different strategy with Cam – I, we, just haven’t figured it out yet. We’ve tried the yelling and the spank threats and the rest of it – all the tools that were pulled on me. And they mostly fall flat on their face – at least long term. They might change the behaviour in the moment but anything in terms of changing this destructive element of his character is wishful thinking. What we haven’t tried, and what I think we will try to implement is something that Donald Miller, despite himself not being a parent, had very wisely suggested the other day. Miller writes, “Great kids come from families in which parents are real about their shortcomings. They come from families who live and believe in grace.” In other words, in the midst of this stubbornness, in the midst of unrelenting determination to have things go his way, we need to show a disposition of vulnerability to Cam. Vulnerability that says, “I know how hard it is to have this trait – it’s been a challenge for me too and I’m still working on it but this is what I’ve done to help me with this… let’s work together on turning this negative thing into something positive.” – I don’t think I’m advocating for some hippie-lovin’ free spirited “discipline,” – not at all.  I’m not so naive as to think that simply being vulnerable to my kid will magically transform him. However, whatever arsenal of tools we do end up using in our strategy to help Cam overcome this character flaw that his dad has unwillingly passed on to him, I am pretty sure vulnerability and grace will need to lead the charge.

What are your thoughts on this? Am I out to lunch? Does my kid need a good lickin’ to knock the stubbornness out of him? I’d be interested to hear your own stories in dealing with troublesome traits in your kids.

2 thoughts on “When My Son Becomes Me: Stubborn Vulnerability”