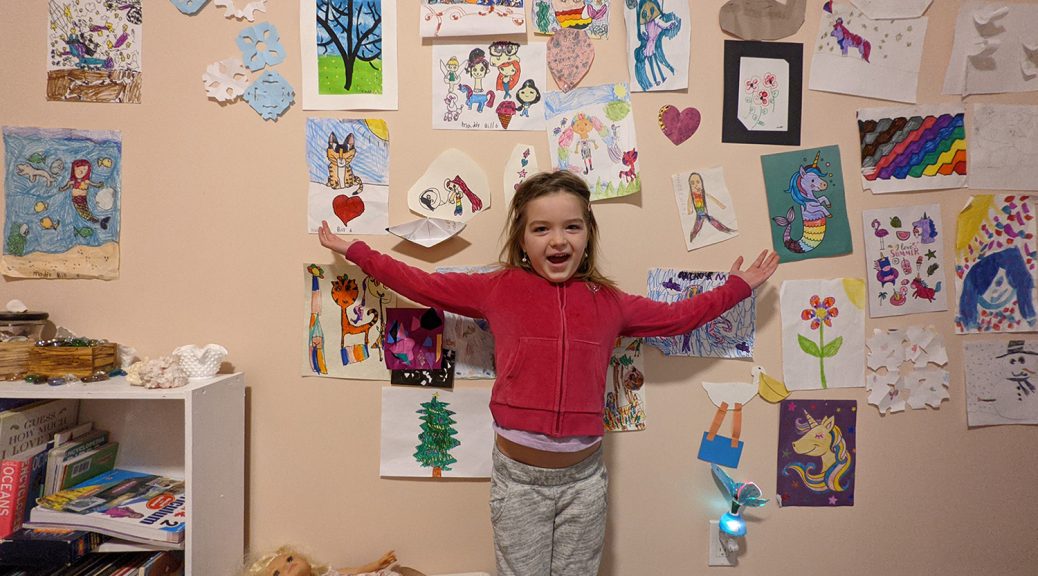 My daughter’s been getting into the Art Hub for Kids thing lately. For those not in the know, Art Hub is a channel on YouTube with video after video of a dad and one of his kids drawing cartoon-y type pictures – ice cream cones, unicorn mermaids, Hatchimals, dinosaurs, emojis, etc. Basically, all the things 6 year olds go gaga over. Viewers are instructed step by step on how to draw and colour each picture. It’s basically that part of the Mr. Dressup show each week where Mr. Dressup takes a black marker to a blank page and begins drawing simple lines that eventually connect and lead to amazing drawings. Only with this one, the kids actually join in and do the drawing themselves.

This past Saturday, Maddy woke up and asked to do some Art Hub drawings so I set her up with the iPad at the kitchen counter and let her go to town. I’m not exaggerating when I say that for the next 3 hrs, with virtually no interruptions, she drew picture after picture of everything you can imagine. At the end she proudly showed off every single drawing, fully satisfied with herself.

Needless to say, I was impressed, if not a tad envious. Not just because my 6 year old has easily surpassed her father’s drawing capabilities but because of her effortless ability to focus on a single task, unimpeded, hour upon hour.

I’ve never been able to focus very well. I wouldn’t go so far as to say I’ve got ADD (although, I wouldn’t rule it out) but in writing these 3 paragraphs, it’s taken me about 45 minutes, so you decide. The Internet certainly hasn’t helped much with this over the years. For instance, writing about Mr. Dressup above inclined me to do a search for “Mr Dressup” because I needed to know: “Is his name one word or hyphenated and also when did he die?!” Which yielded 2-3 videos of him drawing, which then, thanks to the all-knowing and powerful algorithms of social media, brought me to an enthralling 10-minute video of an arrest being made by a bail bonds enforcement officer (I couldn’t see the correlation either but I’ve learned to not question the algorithms. They get really mad when you do.) A coffee refill and 20 minutes later my writing session was done for the day because it was time to go get Maddy ready for school.

As I watched my daughter drawing her heart out while tuning in to Art Hub for hours at a time, I realized that we could have been blasting Weird Al, busting out the latest TikTok dance beside her or sitting on the edge of a thousand-foot precipice and it would not have impeded her focus one bit. Maddy was in the zone. As I reflected on that, I think there were two reasons that caused this: 1. In that moment, drawing brought the most pleasure for her; and 2. She instinctively understood that the reward of satisfaction that would ensue was worth putting in the toil.

There are moments in the midst of a writing session where the words are poppin’, the ideas are hoppin’ and the flow’s not stoppin’ that I live for. (Case in point: this last sentence. Dopamine overload 🤤.) When the ‘oppins aren’t floppin’, I can write unimpeded for long stretches. I imagine someone somewhere has developed a formula that attempts to explicate the correlation between pleasure and focus. But it’s not exactly brain science.  Well, come to think of it, I guess it is precisely brain science. Nevermind. The point is, it’s no great revelation to learn that when we’re enjoying what we’re doing, we’re able to focus with relative ease.

As long as there’s a steady stream of dopamine flowing to the brain, the task at hand will be easy. If you think about it, focusing implies having to work at concentrating on something. Attending to the thing that causes the most pleasure seems to rob focus of its meaning. Our “focus” switches instantly when there’s greater pleasure found elsewhere. And so our brains need discipline because of this tendency to wander in search of greater pleasure. Left undisciplined, we take the path of least resistance in pursuit of it. Every. Single. Time.

Internet distractions are an all too convenient means of taking the path of least resistance to in-the-moment happiness. As I write this, I’m whizzing along until suddenly I hit a bump: I can’t think of the direction I need to go or the word I’m looking for is eluding me. The disciplined approach bids me to dig my heels in and persevere through these immediate challenges head on. The much more slippery unbridled-need-for-immediate-gratification approach tacitly gives discipline the finger and beckons me quietly: “Come back to this in a bit when you’ve got some clarity. Here, there’s this killer rando video of a bail enforcement officer busting out some jiu-jitsu on this dude that will carry you through these tough mental slogs. You’ve worked hard for 3 minutes – this is exactly what your sweet, deserving little self needs right now, you little rascal!” And because my unbridled-need-for-immediate-gratification speaks to me in such a tender, loving voice, I concede, “Okay buddy, but just for a sec ‘cause I really want to get this written. BRB, writing session – don’t go anywhere!” And away we go in pursuit of a happiness quick fix for 20 minutes. Or, um, much longer, some days…

As pleasurable as pleasure can be, the in-the-moment pursuit of it is typically the enemy of hard-earned focus. Anyone who’s achieved much in life would concede that the disciplined life begins with the gritty conviction that pleasure should rarely be the modus operandi to live by.

My suspicion is that the more we learn to ignore the pursuit of easily attainable pleasure in the midst of the barriers to our work, the more we advance in the work itself—we develop greater skills and abilities—which leads to increased moments of living in that sweet spot between pleasure and focus: we can sustain the dopamine flow while working through the challenges. If nothing else, it sounds good on paper, anyway.

This leads me the second observation with Maddy’s art. When I’m able to resist the urge to achieve pleasure through the path of least resistance and push through the obstacles before me, I’m rewarded with a finished product I can stand back and say, “Yup, that was me.” And I think this pursuit of satisfaction can serve to carry us through the distraction and trump that desire to find easier pleasure in the moment.

The Art Hub videos reveal the finished product at the outset, declaring: “THIS is what you will end up with when we’re done.” The viewer has this finished product in their head even before the toil of the work begins. And so Maddy subconsciously imagines showing this off to her parents or standing back and admiring the art piece as it hangs so lovingly on the art wall in her room before she’s even made a single marker stroke. And so what’s really driving her here is the feeling of satisfaction she knows she’ll get when all is done. Talk about dopamine overload. Being satisfied in the finished product brings a level of joy few other pursuits can reward.

I’ve built websites for 5-6 hour stretches into the wee hours of the morning with ne’er a break because I was absorbed with the task of creating something that would lead to that deep sense of satisfaction I knew was waiting for me at the end. And if, as I stated in my previous blog post, the pursuit of satisfaction should be the capital G Goal, then using it as a means of staying focused should come naturally. And indeed, we find that it does. So, when the Internet video distractions begin to beckon, it is knowing the deep sense of satisfaction that comes with pouring those creative juices and energy into that challenging task at hand that will carry us through.

I’m still working on that. I really do live for those moments of being in the zone, like Maddy is when she’s consumed with her art. But unfortunately, I’m far too aware of the delightful distractions that abound merely a click away. Let’s just say for now I’ve still got some work to do when it comes to disciplined focus.

2 thoughts on “Focusing in on Focus”