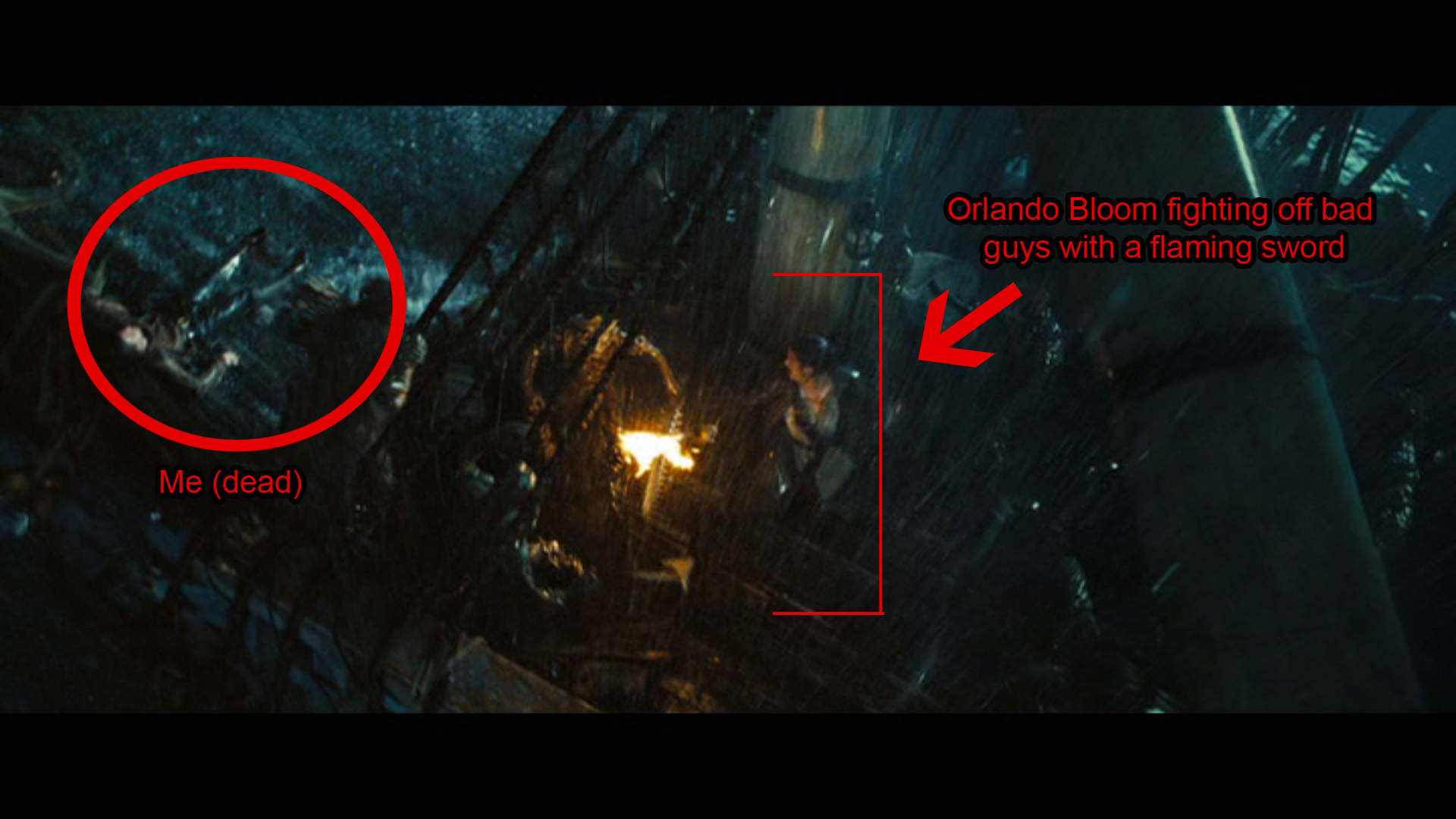 A couple of weeks ago I spoke at Grassroots Church on accepting the reality that we are not the main character in this story – and that if we actually understood what our role is, we’d probably approach this journey we’re all on very differently. I used my own story of serving as an actor… er… extra in a little indy film called “Pirates of the Caribbean: Dead Man’s Chest” as a sort of segue into my point. It was fun.

So I want you to listen to this message because I think it’s important for all of us to gain this kind of perspective. And to help you, I figured I’d provide a bit more detail about my experience by way of showing the actual clip from the movie in which I appear, because, let’s face it, this kind of thing doesn’t happen often so you gotta milk it when you can ;)

Also, I did want to make mention of a few examples from my message (in the off chance you decide not to listen ;) of people who have realized the story is not about them. The first is of a couple that visited our church a month or so ago and left a massive impact on all of those who were in attendance. The second example is of a guy coming to our church in a few weeks and I want to encourage you, if you’re in the Thunder Bay area, to make a special effort to attend as I have all confidence that, he has the words to drastically change the direction your story may be headed in.

What does it look like for us as followers of Jesus to give up chasing a story that we’ve believed was about us all along and instead support the main character in the work he’s doing in this world?

A while ago this great couple came to Grassroots mid-week and presented a documentary on sex trafficking that was really compelling. But you know what was more compelling at least to me? Their own story. Honestly, I was moved more by listening to their own journey to leave one story and jump aboard God’s – or maybe to put it another way, to make God’s story, their story. To play a meaningful and powerful role in God’s grand narrative.

A number of years ago, Jay and Michelle Brock heard International Justice Mission Founder Gary Haugen give a lecture about human trafficking that left them speechless and so disturbed by it that they decided they just had to do something to bring awareness to this major global injustice. So they sought out to make a documentary. No experience. No money. They went on faith, produced what they called a very rough documentary, amazingly got several 10s of thousands of viewers and were inspired to make this second one – Red light Green Light (donate to their cause!).  They are both very educated, very intelligent, potentially very successful people who could have bought into a different narrative, in which they were the main character and the goal was to become successful and get lots of money and WIN because the main character has to come out on top! But instead, they decided to get on board with God’s story, see what he was doing and go from there.

So today they own a tiny trailer in the middle of the bush, have given up 3 years and any money making potential to make this film, and just keep moving forward with this amazing cause. Now they travel around the country in a tiny little car, sharing their film and sharing with whoever will come out and listen to them talk about this passion – a passion that happens to support the Main Character of this story.

You hear stories like that and you can’t help but be inspired. I asked the guy afterward what compels him to keep moving forward and his answer was so simple “Jesus. Yeah man, it’s all about Jesus… seriously, this is all for Him.”

Rhonda and I first encountered Shane Claibourne a few years into our marriage at a time when we were disillusioned with the church… our faith… the whole Christian experience. Shane Claiborne’s book, Irresistible Revolution, is an autobiography of, essentially, him coming to the conclusion that he’s not the main character in this story. This is what he writes:

Me? I had it together. I used to be cool. And then I met Jesus and he wrecked my life. The more I read the gospel, the more it messed me up, turning everything I believed in, valued, and hoped for upside-down. I am still recovering from my conversion … I had been planning to go to med school. Like a lot of folks. I wanted to find a job where I could do as little work as possible for as much money as possible… Then I could buy lots of stuff I didn’t need.” – Pg 41 Irresistible Revolution

His stories are radical, terrifying, but mostly just inspiring. From working with the homeless in Philadelphia, to caring for the dying in Calcutta alongside Mother Teresa, to starting a communal living called The Simple Way in downtown Philly – Claiborne understands that the story doesn’t revolve around him.

Do you know why we’re inspired by people like this? People like Jay and Michelle Brock or guys like Shane Claiborne?  Because we instinctively know that these people are not living stories that revolve around themselves. That their starting point, their frame of reference, has gone from inward to outward – it has been radically shifted to centre around God’s story.  And when you see people taking part in this narrative, it’s hard to just stand by unaffected.

Okay, that’s all I want to say. Except one more plea: Come out on June 10th and listen to Shane talk about the Upside Down Kingdom with an invitation to revolutionize your faith!

Oh, and one more for the road…