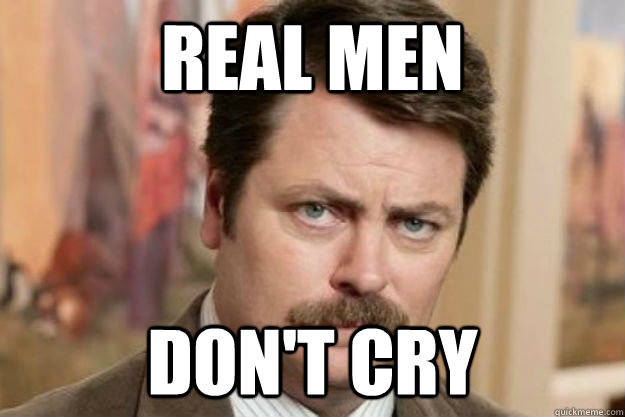 I just stepped in pee. It has nothing to do with this post but I can’t think of a way to start this entry that somehow escapes the “it’s been so long since I’ve last written” bit so I figured I’d start there. I walked into the basement bathroom–which is rarely used by anyone–and immediately felt a wetness on my sock. Turning the light on I notice the puddle of approximately 3-5 day old pee. It only caught the side of my sock, but still. And this wasn’t a “oooh, just missed the bowl” kind of puddle; this was a “I’m a pee right here in this spot, deliberately away from the toilet bowl which is very much within reach” kind of puddle. My kids are so irresponsible. I wish they’d try just a little harder sometimes. Anyway, I hope Rhonda cleans it soon ’cause I’d hate to see her also step in it.

Turning the dial toward the topic of this post…

I’m a pretty emotional guy. Rhonda and I have been tackling Parenthood lately and I’m batting a thousand for choking up at every episode. So far, no outright crying, per se, just a lot of that lump in the throat and the watery gleam in the eye. You emotional types know what I’m talking about.

I don’t mind that I’m like this. There are those who might think my manliness is lacking but to them I say grow up. We’re past that level of gender generalization by now aren’t we? You might as well dock me Man points for having a pitiful workbench area and being intimidated by anything larger than a V6 (okay that one might be warranted).  I think this tendency toward tears trait is traced to my… tradition. As are my mad skills in alliteration. What I mean is, this is a part of my being that stems from something down deep in my bones – it’s in my DNA.  Some people are born with a low pain tolerance and some people are born with a low emotional tolerance (for the record, I’ve been born with both. More negative Man points.) Still, I don’t have identity issues or a lack of self-esteem due to this trait of mine. I’m fine with it.

But sometimes being a crier does have its hindrances.

Lately I’ve been speaking a lot at church. In fact, I’m on pace for about every other Sunday nowadays, which is fine. I like speaking. I like trying to articulate my faith, inspire people, and challenge people to live intentionally for the sake of the gospel and the Kingdom of God. This idea of spreading good news around and encouraging others in their day-to-day lives is kinda fulfilling, I won’t lie. There’s only one problem–and some would argue the use of that word–about speaking and it’s that I choke up. A lot. Almost as frequently as I choke up when watching Parenthood.

It seems like every time I start to talk about something of seriousness – usually having to do with redemption I find – this lump grows in my throat and I have to pause and collect myself, or force myself through it, much to the dismay of the congregation who has to sit and listen to this incoherent stammering. Like I said, I don’t mind that I get emotional – that’s fine. But for the sake of speaking in front of large groups, it really can become a bit of a hindrance.

I’m not sure what to do about this other than, perhaps, just confess that I’m aware of it. Maybe I’ll move beyond it, maybe I won’t. I don’t know.

Let me walk you through the thought process of how I lose my emotional composure. This past week I spoke about hope and what purposeful hope in knowing Jesus looks like. At the end I gave a benediction. It was directed to two groups – the first was for those who currently understand their Jesus-hope and could lean on it and be inspired by it and, more importantly, could go out and live intentionally because of it. The second was for those who found themselves presently in very dark situations, where hope seemed an unattainable, cruel dream. So in my mind ran all of these scenarios in which hope would be hard to come by: Abuse. Guilt-induced self-loathing. Addiction. Loneliness. Loss. Rejection. Pain. Depression. So in that moment of me voicing this benediction, I began to feel myself welling up as I thought about the potential of this being a very real reality for some in this room–and for those in my own life whose stories I know well. People who are utterly dismayed at life’s offering and at personal circumstance and at the cards that have been dealt them and how there’s no way they could play this hand out and come out ahead. But at that same moment, I also thought about how beautiful and how compelling these stories could be, when, in the midst of such complete darkness, God does somehow bring about change. Transformation occurs. Healing, redemption, restoration, mending… it all has potential to unfold in some inexplicable way. And so in that split second thought process, I’m compelled by two extremes and both force me to have to stop, collect myself and breathe. In the first,  I ache because of, well, because of sadness and how many folks’ reality…. just sucks. Plain and simple. The second, I tremble because of what can happen when Christ’s light shines into that darkness. Either way, I struggle to maintain composure.

The thing about church speaking is that these themes tend to come up week after week and they never get old. Which is awesome, really. Jesus is in the business of redemption and as someone who speaks about Jesus, I find myself in the business of telling people about that redemption. And redemption’s a beautiful thing.  ….it’s just that I can get a little teary-eyed about it.

So that’s it really. I felt this urgency to write some thoughts out on this because I’m rightfully getting ribbed for it by buddies (in good fun) and I figured it’s best to let everyone know that, hey, I get it. It can be seen as kind of ridiculous that I often get emotional in my speaking. I am fully aware of this. I can laugh at myself – and I’m totally fine if you laugh along with me. Just don’t be a jerk about it, k? K, cool.

What about you? Are you an emotional type? Are you easily moved to tears? What catches you and forces you to have to swallow that lump in the throat? Share your thoughts in the comments!