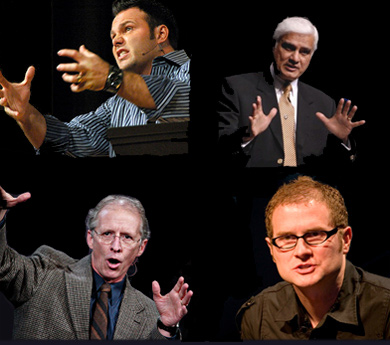 I have this theory that as a 20-30 something evangelical with a fairly normal upbringing in a fairly nominal Christian home, having gone to a fairly normal evangelical college, and lived life thus far with fairly normal experiences by and large, I share a brand of faith that could be transferred to other 20-30 somethings with very minor modifications required. In other words, I suspect that most people share the beliefs, doubts, questions, passions, fears, and concerns that I have at my age and thus resonate with the same tensions of what to believe and how. We grew up being mesmerized by certain tenets of the Christian faith—say Creationism or Dispensationalism—and the sensationalism and apparent logic of such tenets combined to legitimate the entire Christian experience for us, so we bought into it: hook, line, and sinker.

Once we were in, we continued to validate this worldview by associating with similar-minded people—I remember being so confused when I learned that our next-door neighbour didn’t believe in God. How was this even possible? What was that even like? I could not wrap my head around such outlandish concepts as a kid. She was the only person, in my small little world, that held such a worldview. But then, as we continued to truck along the dirt road of life, the quest for authenticity and legitimacy in our communities—and in ourselves—that so clearly defines our generation led us to discover new lands within the faith. Our horizons were broadened and our worlds enlarged. With fear and trepidation we began reading authors who could articulate their experiences really well, and who could relate to the suspicions, doubts, and concerns that we were going through. These authors had gone through the fire and had come out with a new way of looking at things. There was hope. We had always known that Jesus was legit but we were confused with what the church had deteriorated into. These authors helped to refocus on to Jesus. Systematic theology had so many holes poked in it that it began to lose its footing. A new way of looking at the biblical narrative arose and it resonated with us deeply. This new kind of Christian experience worked for many of us who had become disillusioned with our own faith experience.

The conventional system no longer satisfied. Whatever the reasons, and there were many to be sure, the convictions and traditions held so tenaciously toward certain aspects of the faith were loosed. Not let go, just loosed. Others took their place: grace, justice, mercy—things that couldn’t be quantified but that roused us and that we, as evangelicals growing up in the 90s and 2000s, began to believe were at the heart of the faith. Authenticity could be found, we reasoned, when justice and mercy and grace and love and all those other hippy adjectives would just inundate our church communities. Down with the comfort-seeking, pew-sitting, born-again verbiage, humdrum Christianese that lacked teeth. In its place was action-driven, heart-felt, emotions-on-your-sleeve Jesus followers who weren’t about to sit back and let the world pass us by.

Yet many of us, I think, found ourselves existing somewhere in between this admittedly false dichotomy. We understood the cynicism and skepticism that was happening all around us—we even contributed to it, and often still do. But we reasoned that there was much to contribute on either side of this. The John Piper’s and Ravi Zacharias’ could be read and held in tension with the Rob Bell’s and Brian McLaren’s—despite what perhaps the former would think.

The reality is we’re looking for Truth wherever it may be found, in whatever context it expresses itself in, and regardless of who throws it on the table. As long as that Truth resonates with the legitimacy checklist that our generation requires, we buy into it. And that checklist is as follows: authentic, logical, heart-driven, and an alignment with scripture. Perhaps I shouldn’t be so bold as to proclaim this checklist applicable to all in my generation – but it’s definitely my own worldview legitimizer. Notice that some of these adjectives fit perfectly well within a modernist paradigm and some within a post-modernist paradigm. And that’s just the point: we’re not into labels; we’re more both/and rather than either/or. It’s difficult to categorize us because Truth cannot be categorized and the pursuit of Truth, I think, will lead one to eventually break down the walls of the boxes that each of have neatly stored our theologies in during our fairly normal upbringings.

At least, this is where I’m coming from these days. This may not be how many of us with a fairly normal shared Christian experience would articulate the faith but if my suspicion is correct, then what I’m saying here connects with you, even if you don’t realize it. You might be under the assumption that what Bell spews from the pulpit is a conundrum of Jesus-confessing liberal emotionalism or, alternatively, what Driscoll yells is narrow-minded conservative dogma, but such caricatures is neither accurate nor healthy. If we can begin with the assumption that both sides—and all those representing sides in between or even beyond this spectrum—are earnestly in pursuit of Truth and figuring out how to live out this Truth, then maybe we  can begin to appreciate and even embrace what each brings to the table. We don’t have to agree with them, but we should at least be willing to springboard off of these perspectives to formulate our own worldviews. I say this cautiously, even now, fully aware of what some may think and how some might respond to this proposal.

And that’s the thing, whatever “sides” speak into it, our theologies and our worldviews need to work in the here and now. We can deconstruct and reconstruct our worldviews until we arrive, but ultimately, our worldview needs to make sense now, in this world, in the contexts we find ourselves in day-to-day. I played squash with a guy a while ago with about 25 years on me. I could tell in the first two games that he was disgruntled and seemingly not present. His mind was elsewhere. Before the third game I asked him what was up and he began to unveil how his marriage of 17 years had collapsed 9 months earlier and that certain choices his estranged wife had made had completely wrecked his life, sending him into a downward spiral. He felt hopeless and directionless, and there was a very real sense that he needed some clue as to how to move on. I listened to his story, which in itself can be cathartic, and then I gave him some advice about making choices and then moving forward, advice that I believe stemmed from God and would, if applied, ultimately be transformative in his life. It was practical and rooted in the here and now. Whether I was neo-reformed, emergent, mainstream non-committal, or anything in between wasn’t the point. It sounds cliché but grace, love, and compassion aren’t categorically appropriated to any one perspective within our tradition. They transcend it all for the sake of healing the soul and revealing the Author of life. This guy needed to have direction that would steer his life away from the impending train wreck it was fast becoming. Whether or not what I said did have any impact, I can’t be sure. We played 3 more games; he duly trampled me, and then quickly left the court without a goodbye.