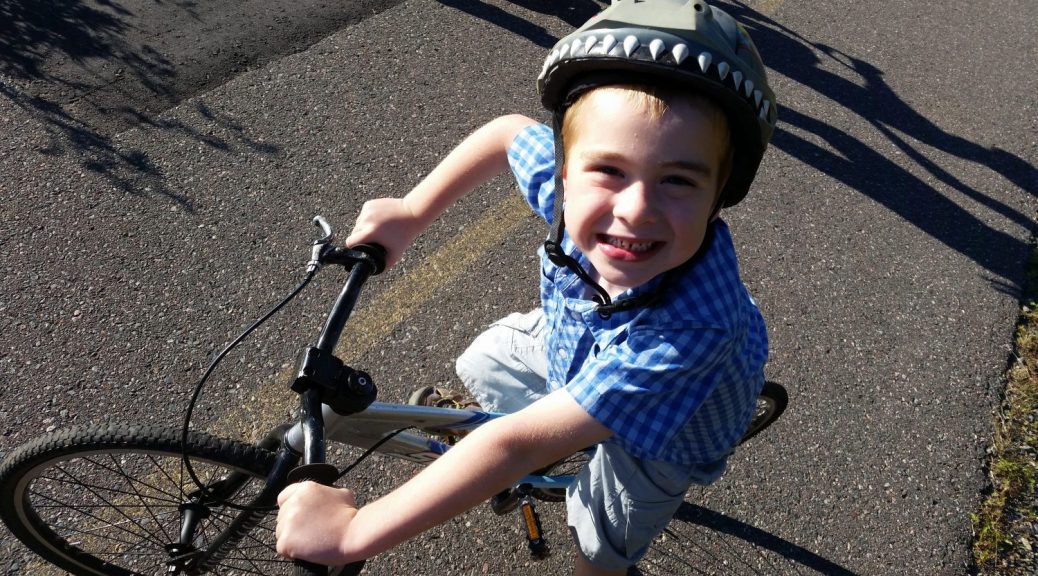 This morning I was inspired to ride my bike to work. In fact, I was inspired to bike with Cam and Graham to school first, and then ride my bike to work. The inspiration began as I lay in bed, giving half an ear to the kids playing in the livingroom and to Maddy “talking” from her crib while the sun streamed in from the window to tell me it was going to be a fantastic spring day. Such a glorious feeling waking up like that.

8:20am. I’m running late for work but my commitment to bike with the kids is now in stone. There’s no going back. Graham is stoked beyond anything to show his peers how cool he is (nevermind the fact that he insists on tucking in his t-shirt to his shorts because “this is what ‘cool’ kids do,” but I digress) and Cam too is pumped to skip a bus ride in order to ride with Dad to school. Backpacks are on, helmets are buckled, we’re out the door.

30 seconds later I return, a pit in my stomach. “Cam’s bike is gone.” I tell Rhonda. “Oh nooooo” she groans. And then rushes out the door, to come back 30 seconds later with, “Mine’s gone too!” Sorry boys, gotta take the bus this morning.

Only that wasn’t quite the word that was going on in my head at the time. We had purchased Cam’s bike second-hand last summer. It was a snazzy racing bike and the kid loved it. I mean, he loved it! He flew on this thing and there was at least a 1-2 year age boost, at least confidence-wise, when he stood on his pedals and rode down the trail by the river. We loved watching him ride this thing – it gave us such joy to see him so full of joy! And Rhonda’s bike was purchased a few years back but still in great condition. We’ve never been a family to drop big bucks on bikes, but we had decided to go for it this time because if you’re going to start trail riding (which she had been wanting to get into), you want something reliable and Lord knows I’m not about to fix something that breaks down on the trail. So we splurged and got a good bike. And she loved it. Luv-vuh-ed it!

Needless to say, the frustration immediately begins to set in as we consider what we’ve lost. All morning I’m stewing at work. Annoyed. Feeling vexed and aggravated over both the fact that we’re out two family bikes but also because it’s partially our own stupid fault for not locking them up and also because why do people have to go and steal property that isn’t theirs?! It was quickly consuming the entire day, stripping it of all its fantasticness.

But then something happened.

Now I realize it is so cliché that I probably shouldn’t even blog about it, but the fact that it hit me so hard and provided such a solid life mini-lesson that I want to one day fall back on is reason enough for me to do so, so just sit tight.

Here’s what went down: I scrolled through my newsfeed and came across Humans of New York‘s latest series on the stories of those families who have endured or are in the midst of enduring pediatric cancer. Kids who have had to endure the most agonizing treatment to rid their bodies of this terrible disease. Moms and dads who had to sit there helplessly as their child suffered. Over and over again, Brandon rips the reader’s heart apart as we read about the staff and the families and the patients’ themselves who talk about the devastating effects cancer has had on their worlds.

I’d love to say I quit whining about having our bikes stolen the rest of the day but the truth is I’m just not that noble-minded. In fact it seems to ease the frustration just a hair each time I talk about it with someone. But at the same time, there was this thought in the back of my head: “Your kids were playing together in the livingroom this morning…. Maddy was talking from her crib… they wanted to bike to school together with you… they’re going to be there, waiting for me in a few hours with open arms as they do every day when I get home….”

Gradually throughout the day the frustration of the bikes getting stolen subsided. I even told Rhonda in late afternoon that I was doing a lot better and that perhaps she would stand to check out the series on HONY and gain some perspective too. I’m not sure how cool it is that I’m being healed of my own self-pity and frustration by reading about the suffering of these kids and their family’s plight, but there it is.

Sure enough, my kids welcomed me with open arms when I got home. We had fun around the dinner table, went to t-ball and watched Graham get a hit. Rhonda and I played catch in the yard after the kids went to bed and all in all, my day ended up being pretty fantastic after all.

If you haven’t done so yet, I really encourage you to check out HONY’s series on Pediatric Oncology at the Memorial Sloan Kettering Cancer Center. These powerful stories are good for all our hearts – not just curmudgeonly guys like me. Check out his FB page. And what’s more, please consider making a donation toward the fight against pediatric cancer

Oh and PS – if you’re in Thunder Bay and reading this – we’d appreciate it if you could keep an eye out for these bikes. Because despite all of this, it’d still be great to get them back ;) 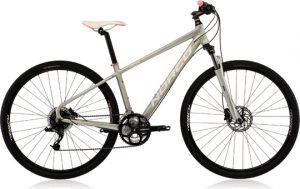 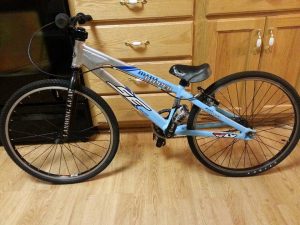 One thought on “Perspective is as True as it is Cliché”