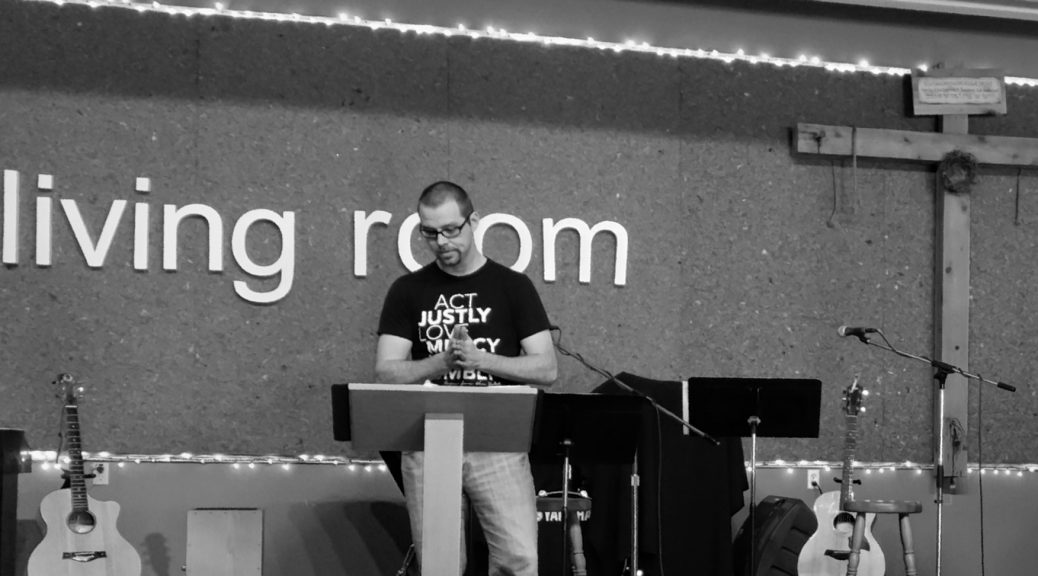 I love teaching. I’ve taught all kinds of things over the past 20 years or so. High school computer science; middle school math; web design; guitar (I don’t play guitar, so figure that one out), college communications and digital marketing. Quite the array of subject matter. My favourite thing to teach, though has been the Bible. Well, if I’m honest, it’s teaching in such a way that inspires, challenges and encourages and usually uses the Bible as the means to do that.

A few years back our church was between pastors and I had an opportunity to step in as the interim teaching pastor. It was a year’s gig that had me teaching 5 out of every 6 Sundays. I held my full-time job simultaneously so time was a precious commodity and most Saturdays were spent from sun up to sun down preparing the teaching for Sunday morning. These were hectic but special days in our lives. Weekly pouring over the words of scripture and mining for a message that would help the community move forward ever so slightly in its mission to bring about God’s kingdom way of living. I know I’m not a polished speaker and at times lacked in coherency, but overall, I view this experience as not just rewarding but also successful in terms of achieving what I sought out to do in encouraging our community. I recall frequently saying to Rhonda that this was the most fulfilled I’d been in my career. I was using my gifts to impact a lot of people in such a positive way and that sense of fulfillment was hard to top.

And so as I continued in this role week after week, in my mind there was this momentum building toward me moving into this position full-time. It all made perfect sense on paper: my gifts were well-suited – both teaching and being a people person; I already had a degree in Theology; Rhonda often led music and was a great co-leader; we knew the community well and, like I said, I was really fulfilled in it. So, when it came time to apply for the full-time position, I was 100% convinced this would be “the next thing” for the Bill family. What I didn’t know, however, was that the guy they ended up going with happened to have checked all the boxes that the church was actually looking for – spiritual maturity; a far deeper knowledge of the Bible; background in spiritual formation, leadership experience, intuitiveness, an amazing sensitivity and gentleness toward others and, oh yeah, a PhD under N.T. Wright, arguably the most prominent New Testament scholar of the past 30 years and a highly influential author in our community. I couldn’t fault the church for going with him – he’s great and I probably would have done the same had the decision been in my hands.

What do you do when you’ve spent so much time and energy carving out this new direction for your life, convinced it’s ordained and is the only future that will make sense or bring about fulfilment in your life and then are confronted with the stone cold reality that this just is not the way things are going to happen? That those hopes and dreams for this blissful fulfilling future will not come to pass and you have to move on?

The next few days and weeks and even months had its challenges. There was confusion and self-doubt and just a lot of sadness that Rhonda and I shared. We talked a lot about it and really sought to process it as best we could together and with the help of friends. We could have resisted the outcome and found a way to make it work somewhere else, maybe, or we could come to terms with the reality and find ways of ensuring the time invested leading up to this was not in vain. Thankfully, we chose the latter.

Grief can be an awkward companion. It comes whether it’s invited or not and has to be acknowledged one way or another. Yet, if welcomed, it is also an underrated companion, offering a gift that only time and reflection seem to allow: perspective. I’m not sure we’ll ever arrive at enough perspective. It seems one of those things that is always needed and continues to adjust according to life’s circumstances. There are, of course, other ways to gain perspective but grief just forces it on us.

That perspective was to come on several fronts. The first was the severity of it all. I’ve grieved the loss of loved ones and have seen others do the same. It’s woefully misguided to compare a career move that wasn’t meant to be with the loss of a loved one or some trauma or tragedy experienced. Sure, crushed expectations hurt and cause all sorts of emotional responses, but typically, you’re able to get up the next day and go to work. As far as grief goes, I’d much sooner welcome having to grieve this then other much heavier burdens.  But at the same time, because this kind of grief is not in the same realm, it can seem silly, be pushed aside and never confronted or dealt with properly. Because this experience just happened to land a certain way with us, for whatever reason, we realized we had to wade through the experience thoroughly and mine the areas of our hearts that had gotten so entangled in the future that was not to be.

The second was recognizing our own tendency to have the tunnel vision of believing the grass to be much greener and lusher on the other side. Reality is just never like that and now looking back on it all, there’s just so much gratitude on how things did and did not transpire. Playing out the scenario/life that would have been had we actually moved into a full-time teaching pastor role was an important part of this process. There were a number of repercussions that I maybe had a slight inkling of at the time but wouldn’t be able to fully appreciate until perspective emerged on the other side of grief. For one, entering into the messiness of community as pastor is no small challenge. What happens when your role with the community you’re immersed in, the people you’ve called your closest friends and who you are most vulnerable and real with, suddenly become the people you pastor? You better believe there’s a need for some serious tweaking of relationship boundaries. It’d be naïve to think otherwise. And of course if it did turn out, I’m sure we would have made it work with our community but I’m just glad that while I had to grieve a future that was not to be, I didn’t have to grieve the inevitable obfuscation of some of the most important relationships in our lives.

Vulnerability in my own faith journey is another thing. Freedom to evolve and move forward as I seek to understand and express my faith in the world can be paralyzed by a leadership role that more or less requires a particular consistency (mistaken as Spiritual maturity). What happens if a community is established on a particular set of convictions but its leader is no longer able to uphold those convictions? You can say it’s time for that individual to move on and find another job but that can be easier said than done when their livelihood, way of life, community and so much more is wrapped up in the role they play. When I reflect on my own faith journey, particularly over the past 10-15 years, I am grateful I haven’t had any major external pressures forcing me to conform to views I now believe to be antiquated or misguided. It’s the nature of faith to grow and change in our understanding of things – both epistemically and pragmatically. In many ways, it’s unfortunate that the delineation between churches is drawn on lines of theological doctrine as it forces those in leadership to stay within its parameters, not allowing growth or new perspective. Or at least not publicly. Who knows, maybe it’s just me that is at any time dealing with a growing dissonance or who seems to endure some existential crisis every 5 years or so but if that’s the case, then the best thing that could happen was for me not to land a position that held expectations of ideological inertia. This is something I want to write more about in the future so stay tuned.

All this perspective grief has afforded me has sustained us in the time since that fateful season of our lives. I don’t like grief, of course, because it’s not much fun and I have countless other ways I’d prefer to spend my days, but grief doesn’t really give a crap about how you’d rather spend your time. It barges into life because it’s for us. Grief is for us. Even though it’s grief that brings us to our knees it’s also grief that paves the way forward, giving us the strength to emerge as honest and vulnerable, feet planted, chins lifted and ready to tackle whatever comes next.

One thought on “Grief is For Us”