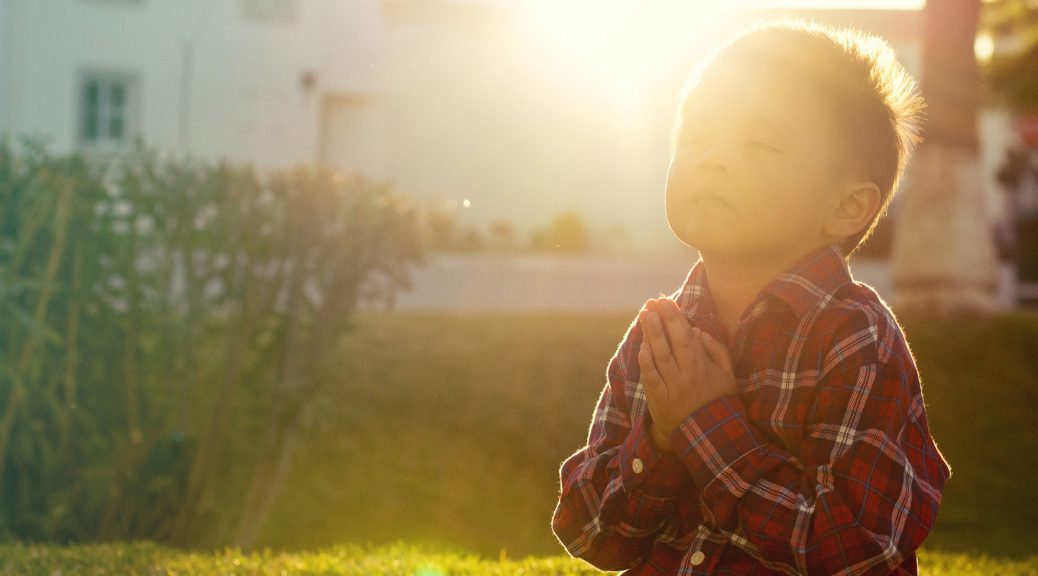 We live according to our beliefs. “Beliefs” is an all-encompassing term encapsulating our convictions, our values, our understanding of reality and our constructs. The impetus that decides whether we stop and give $5 to a street person or keep walking is based on what we believe our moral obligation to be in that moment, how we believe that individual might spend that money, whether we believe we can spare the inconvenience and potential awkwardness of the interaction and whether we believe our own financial security and comfort is okay to be sacrificed in that transaction. Literally every outcome in life that comes of our own volition is a result of the set of beliefs we subscribe to.

This is why when it comes to imposing beliefs on our kids, it requires some serious intentionality. This is true in all of life but it’s maybe most important in the realm of ideas and practices in the life of faith. I know this to be true because, at least in my own life, it is the constructs regarding spiritual matters that lead to the set of convictions and practices and traditions that not only shape how I live but also form my sense of purpose, contentment and direction in life more than anything else.

Consider prayer, for instance. You know, that super easy to comprehend concept and definitely no baggage-associated topic that everyone loves to discuss.

I heard a simple line from a podcast the other day: “What we think about God is demonstrated best by how we pray.”

I like to think I had grown past the “genie god” or “Santa Claus god” constructs of my youth but my prayers would disagree. Prayers that just ask for “stuff” – even good and worthwhile stuff—tend to have the opposite effect of building faith. Here’s what happens: you fervently ask for a friend’s healing, because that makes the most sense and is within God’s character, ability, etc. but then it doesn’t happen. This causes doubt, confusion and all sorts of emotions directed at God for not coming through as you had expected which in turn begins a drifting away from God and even spirituality in general. This fundamentally misguided understanding and belief about prayer causes the stunting of spiritual growth.

Ironically, maybe what’s worse is when there’s prayer for healing of a friend and the healing actually takes place – this time. Because now that butler-in-the-sky god has been reinforced, instilling greater faith in that particular construct of that god and that particular understanding of how to get that god to do your bidding. The code has been cracked. But what happens the next time a friend is sick and the same formulaic approach is taken but the friend dies instead? It seems the fall from Faith Mountain is even further now. Sure, the seasoned believer typically finds ways to rationalize it through familiar quips: “God works in mysterious ways” or “His ways are not our ways” or some such approach but this lip service can only take us so far and it takes some serious faith fortitude to actually keep clinging to this. The reality is, whether prayer is answered as you hope or it’s not, doubt ensues and it’s only a matter of time as to when – whether it’s immediate or it’s delayed.

Not only have I experienced this let down in my own life but I’ve seen it in so many others’ as well. In fact, this is probably a struggle every believer encounters at some point and probably one that persists throughout their faith journey. I have no data to back this, but I would imagine this belief about God and consequent approach to prayer is one of the main reasons the passion and pursuit of spiritual matters fizzle out for most people raised in religious contexts. Despite well-intentioned, we’ve been handed a particular understanding of God and prayer that has led to negative consequences for the majority of us. I get it. I mean, we’re trying to take the BIG ideas about Ultimate Reality – ideas that by definition are beyond our finite ability to comprehend – and somehow distil them down to coherent concepts our kids can digest and align their lives in accordance with. I’m almost 40 and have been wrestling with comprehending this Divine Mystery my entire life and most days I still have massively nagging doubts that what I’m clinging to isn’t merely a figment of my imagination.

We understand reality through our constructs. This is especially true with the ineffable, incomprehensible Divine. When words and the means of comprehension simply don’t exist in our limited and finite minds, we either speak in tongues (hehe) or we come up with models or constructs to help us make sense of it. Accepting this fact is a great first step toward a mature faith as adults but it’s also an important step in the process of passing on a belief system to our children.

With the example of prayer that I’ve been using here we can see how, for so many of us, the baggage of misguided constructs can have such long-lasting and damaging effects. I agree that the nature of God as all-loving, all-powerful, etc. is accurate. I want to maintain this belief in my life because doing so is beneficial to the world. Living in response to a loving God helps me love others and so forth (hopefully). So this is good and worth passing on to our kids and allowing it to shape their realities as well. And so if this is true, then it leaves us with having to adjust the constructs and expectations of prayer.

The wish-granting, butler-in-the-sky Santa Claus god who is here to answer our requests as presented through earnest prayer seems damaging and deeply problematic to the life of faith. Again, it destroys faith rather than builds it. It’s a part of our belief system that we don’t need to pass on but the question then becomes what do we replace it with? In other words, if God’s not like that, then what role does prayer have and how do make it a meaningful part of the rhythms of our kids’ lives that doesn’t result in them carrying baggage and resentment? That allows them to maintain God as love but not their personal butler?

I don’t imagine I’ll ever arrive at a satisfactory answer to these questions, to be honest. My own prayer life has been bruised and battered so bad over the years as a result of unrealized expectations due to poor constructs that I’m only now beginning to think about it again in hopeful, life-giving terms. I’m starting to understand who God is anew. Like I said, those ideas of being all-loving, etc. remain in tact but the rest of it needs some serious dismantling to say the least.

So without going into this too deeply because, let’s be honest, this is already long enough, I think it begins with being honest with our kids and ourselves about all of it. Acknowledging our inadequacies and shortcomings, being vulnerable with our inept portrayal of God and consumerist approach to prayer. And then, practically, begin by using the prayers of the saints that have gone before us. Making the prayers of others – others who have a deeper and more mature perspective and approach to these things – our own. So maybe it’s the Book of Common Prayer, or even going to the Source with a regular recitation of the Our Father. I think this approach holds weight, although like anything has potential to becoming a rote practice or empty ritual as well. The key is the intentionality behind it all.

So not just how we pray but also our understanding of prayer’s purpose may need maturing. Rather than perceiving it as a means of getting stuff, we begin to see it as a means of learning stuff. I imagine prayer that leaves a lot of space for silence will reveal all sorts of things about our heart and where we need work.

What this boils down to in terms of instilling helpful constructs and beliefs about prayer for our kids is simply this: it takes time, intentionality and patience. Rattling off a list of prayer requests as the last thing we do before lights out at the end of the day may be easy but it’s not doing any favours for anyone. Maybe praying less but carving out more time when we do, adjusting our expectations and leaving space for contemplation will prevent some of that baggage from forming and will let in some light. And finally, maybe prayer should just become less task-oriented and more rest-oriented as a whole: “Come to me all you who are heavy laden and I will give you rest for your souls.”

This is not a comprehensive or necessarily well-thought out approach to prayer for myself, let alone my kids, but it’s a start. If it’s true that our prayer life reflects what we believe about God, then perhaps this is the best place to begin in helping our kids form a healthy belief about God.

This post is part of a series in the #2021WritingChallenge started by Krista Ewert. This week’s word was “Believe.”

2 thoughts on “Constructs and Prayer: Building Belief Without the Baggage”