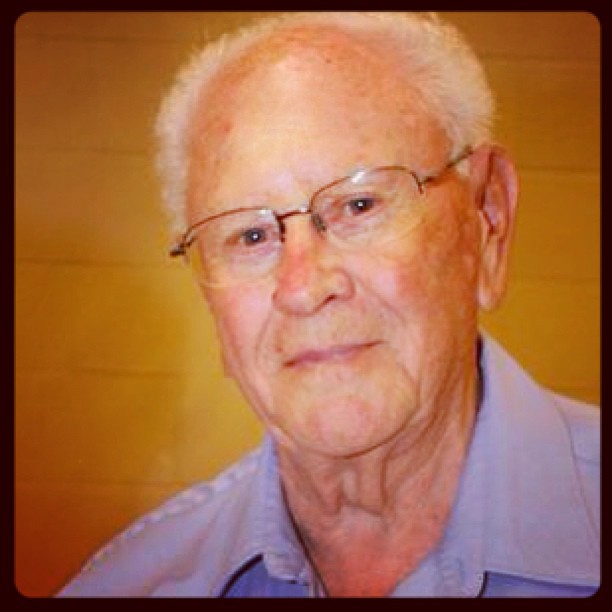 Grandma and Grandpa had been married for almost 68 years, which in itself is a feat so rare today. He owned a garage and through it supported a family of 10 kids in Estevan, Saskatchewan (It’s a strong Roman Catholic family ;)). Ironically, I’m told, he was a lousy mechanic, not too unlike his grandson – but he liked “tinkering.” Sadly, I don’t have a great deal of memories with Grandpa, to be honest. Mostly because we lived 13 hours away and so our time together was generally sporadic and brief. Having said that, as a kid, almost every summer we would head out to the southeastern corner of the “land of living skies” to spend time with the family. I remember the anticipation we felt as we headed west on Highway 39 and saw the smoke stacks of Estevan’s power plant on the horizon, indicating that we were mere minutes away from seeing the big family and getting hugs and kisses from our grandparents. The summer visits were full of neighbourhood pool swims, backyard barbecues, and just completely stereotypical family get-togethers – of which I relish and miss sorely.

As the years passed, the visits became more infrequent. My immediate family moved up north and it made for a harder time to visit annually. With Rhonda, we generally always stopped in between summers in the Bahamas, enroute to or from B.C. Our time together with my grandparents, though brief, was always enjoyable. We’d spend a night or two and catch up on life and chat about those things you chat about when some 60 years divide you: the drive, the weather, Mom & Dad back home. Usually in that order. Of course, Grandpa’s hearing worsened over the last few years especially and that made for interesting conversation: “Beg your pardon” – classic Grandpa line that, I hope, gets etched in his headstone, as it captures much of what Grandpa was all about: an interest in what you had to say, the manners of a true gentleman, and a terrible hearing problem!

We last visited Grandma and Grandpa last summer. Grandpa was already wearing out at that point, clearly on his final lap in life. One night the two of us were sitting at the kitchen table. The kids were in bed. Rhonda and Grandma were chatting in the living room. We had already worn out the normal conversation pieces so I figured I’d get a bit personal with him. I asked Grandpa if he was scared of dying, if it kept him up at night. His response was simple, yet it conveyed something so admirable about him. Grandpa said he wasn’t scared, that it didn’t keep him up at night. And then, as he often did, he turned his attention to the needs of others and quivering, told me that his main concern now was for Grandma and the Grandkids. For Grandma because he wasn’t sure how she would do without him – and then he gave me a quick wink – and started telling me what I already know about the world we live in today and how desperately troubling it is and how there’s no saying what’s going to happen with the way things are going. His concern and his hope was that the grandkids–and now great grandkids–would figure out a way to get by in life that wouldn’t defeat them. He said that, above anything else, any thoughts of dying or health, this is what kept him up at night.

As his time on earth wound down, Grandpa’s main concern was other people.

To those that knew Grandpa, this conversation won’t come as a surprise. In fact, putting others first was his (and Grandma’s, for that matter) nature. This is what my Grandpa was like. The truth is, I don’t have a negative memory of Grandpa. Of the too few memories I do have, I’m comforted in that I actually do not have one bad memory of my Grandpa. I can’t say that about too many people, to be honest. Now, to be sure, we enjoyed the special, biased relationship of Grandpa-Grandson and as such I was never afforded the experience of anything but a completely benevolent, self-giving, doting man. But I’ve heard stories, and I’ve witnessed his interactions with others over the years, including neighbours and the like, and even in amid all of these contexts, I can’t say there has ever been a smidgen of selfishness or cruelty shown toward anyone. He never spoke bad about others, he showed integrity in his business dealings, and he was genuine with anyone he came across. I don’t think this is just my experience either. The truth is, I’ve never heard a bad word spoken about Grandpa, aside from, perhaps, those frustrated with his relentless poor hearing ;) Grandpa was one of those quality characters inside and out. The kind of man who was defined by kindness; whose heart was big and beautiful and poured out freely toward others.

I know it sounds pessimistic, but I don’t know too many people like Grandpa. Everywhere I turn, including inward, I see people badmouthing others, taking shortcuts, clamouring for recognition at all costs, stepping on the backs of others to get ahead. It’s all a bit much. Grandpa’s character and attitude toward life and others stood in stark contrast to this. It served as an anomaly in this mess of humanity. It wasn’t the norm.  Boy oh boy, at the end of the day, I’m grateful for it. I’m grateful for the example he has left us on how to live better: Simple. Content. Loving. I’m grateful for the family he bestowed that love on to. I’m grateful for the challenge he has left us to emulate that same character toward not just our own family but the world around us as well.

Over everything, though, I’m grateful that I got to call this man Grandpa.