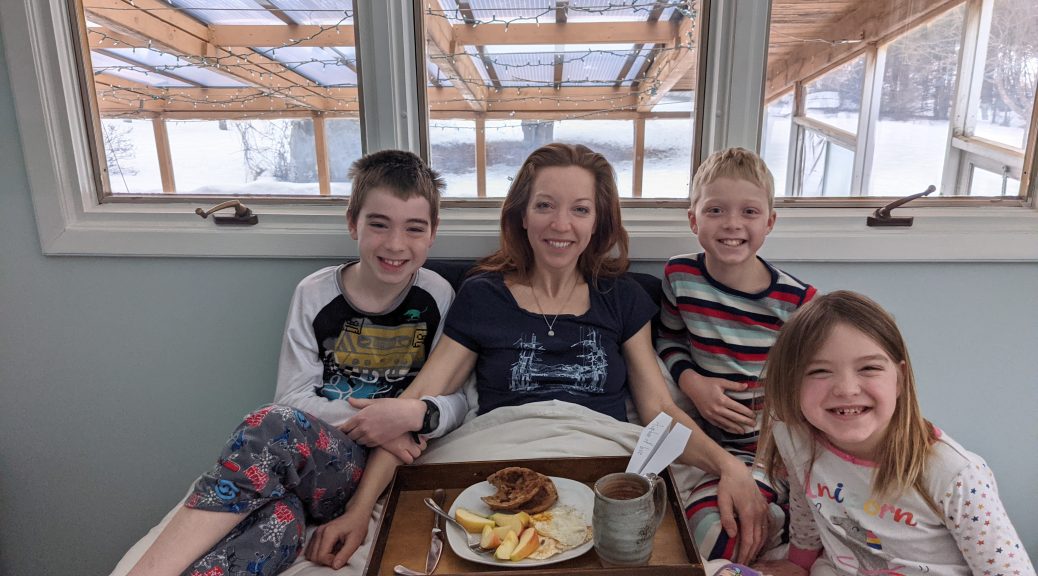 It is somewhat serendipitous that my wife’s birthday landed smack dab in the middle of the week in which “simplicity” happened to be the word to write about for the #2021WordChallenge. I feel compelled, and in fact am eager to dedicate a week of my writing to the one who demonstrates to me the beauty and allure of simplicity every day. I’m also quite eager to share this photo of her. There’s been this thing over the past few years in which we post terrible photos of each other on our respective special days. It’s the simple things that make life flourish, amiright? #SheLovesIt

This coming August we’ll have been married 17 years. We’ve known each other for 20, which, come to think of it, means I’ve known her for more than half my life. She can’t say that, though, as she is 2 years older than me. I’ll let you do the math. I feel that’s important to establish here.

Rhonda loves simplicity but is anything but simplistic. This, despite the air she has a tendency to convey at times of being flighty. It’s taken a few years but I’ve learned to not be duped by that persona. Being forgetful and inadvertently disconnecting from the moment at hand because of some distraction does not make her simplistic. It makes her forgetful, perhaps, but not simplistic; so let me dispel that silly non sequitur right from the get go.

She’s drawn to simplicity in the way that heavy objects are drawn to earth: she gravitates to it. When there’s drama, Rhonda’s tendency is to move away from it at 9.81 m/s2 . Part of this, no doubt, is her leanings toward a 9 on the Enneagram (She’s a 7 through and through, but depending on the context can be a 9). There are people we know in which no matter their efforts, drama seems to find them. And though they may always have a jaw-dropping story to share at any given moment, the relational complexities, not to mention emotional drain, that being caught up in that much drama inevitably invites is just not something Rhonda wants to bring into her own life. And so she avoids drama when she can and her life has become simpler because of it.

Her formula for friendships is simple, too. She pours herself into those around her because she loves them. That’s it. Rhonda, weirdly, does not hold grudges or resentment. Like, at all. I know, it’s strange. She has this uncanny ability tp look past so many of the faults of others. She sees the good in people and, even with those more challenging types in our lives, she has loads of empathy, considering their baggage, experience and background factors that make them the way they are, and then in light of that, accepts them in their imperfections. Well, usually. I mean, she’s not perfect but she’s a heckuva lot further down that road than I am.

When it comes to possessions, Rhonda’s got simple needs. I never know what to get her for Christmas or her birthday because “getting” is not something that’s ever on her radar. Gifts are not Rhonda’s love language. She doesn’t have expensive tastes or needs. Give her $20 and an afternoon at Value Village and she’s in heaven. She likes second hand pottery, a good book and a sweet deal. We’re going skiing tonight for her birthday because she’d rather an experience than a thing. How she ever arrived at this profound reality shaping posture is beyond me and something I continue to struggle with daily, as I scroll through Amazon looking for the next sweet purchase that will finally bring me the satisfaction I know is just beyond my reach.

Her work philosophy revolves around simplicity as well: put the hard work into what you love and the reward will come. That’s it.  She’s grown a successful catering business over the past 12 years through this simplistic approach. No doubt she could have bought into greater “success” and expanded to open a restaurant, hired a bunch of staff and gone down that road but Rhonda’s never been one to bend her knee to the world’s expectations and definitions of success and that’s certainly true with her business. Again we see how that pursuit of simplicity comes through even in her business approach – her current home catering model avoids all of the complexities of staffing issues and overhead costs and regular hours and so on. There’s freedom in simplicity. Of course, this is not to say hard work isn’t required. Far from it. Yesterday, for example, Rhonda completed 42 straight days of a catering contract – 42 days in a row of rising at 7am and finishing the day at 10pm. She is a beast. No one said having a simplified approach to running a business means the work is easier. Far from it. But avoiding hard work isn’t a part of her strategic business goals. That hard work and simple approach to business has yielded success on all accounts. And I’m not just saying that because I’m a biased husband; read the reviews of A Fine Fit Catering across the interwebs and you’ll see what I mean. They speak to that hard work, that commitment, the quality of her services and all of it while smiling and genuinely loving every minute of it. I don’t know if there exists a better business model to be honest.

I’m not sure if you’re able to read between the lines here so let me just spell it out: I’ve got a thing for this girl. I think quite highly of her, in fact. We’ve watched This Is Us and I’ve always resonated with the relationship between Jack and Rebecca and, particularly the way Jack looks at Rebecca. Jack’s married to Rebecca for 20 years (I think?) and as a viewer, we’re left with no doubt in our minds just how unequivocally stricken he continues to be with her. It’s a show, I know. But I get it. I’m not saying I’m anywhere near the character of Jack here (I mean, come ON!) but I resonate with that deep and fiercely passionate adoration he holds toward his wife. I really get that. I’ve had that going strong for almost 20 years now and it doesn’t seem to be fizzling out any time soon. I praise her to anyone who listens, and even mostly those who aren’t listening. People get sick of it and it’s all a little too much for them. That’s fine. My buddy Jack endured that as well.

As she makes another circle around the sun this week, she continues to inspire through her life of simplicity. It may be the quality that defines her most. One of the lesser known benefits of it is that as she seeks to achieve this virtue through every facet of her own life, she can’t help but have it wear off on those closest to her. Our family is far better off for having a mom and a wife who cherishes the simple things of life. And also, life is a lot less expensive. ;) I hope you enjoyed your breakfast in bed, Rhonder ;)